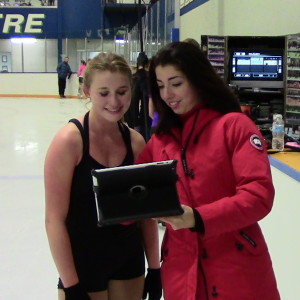 Tugba Karademir has represented her country in many international events. Her home Club is Kocaeli Belediyesi Kagitspor. Her first international competition was in the Netherlands. She was 8 years old at the time and won a gold medal at this competition 3 years running. She won the gold medal in the Balkan Games when she was 10 in 1995. After these early successes Tugba and her family realized that she was not improving at the rate she was before and decided to search for training options. The conditions in Turkey were not ideal for a young figure skater to succeed at an international level. They decided to leave everything behind and move to a country with a very strong background in skating. They relocated the family to Canada where they began a new life. Tugba had a good start in Canada, she picked The Mariposa School of Skating in Barrie, Ontario as her training site. However, a year later she injured her lower back and was forced to stay off the ice for a year. She got back on the ice in 2000. She won the Central Ontario Jr Ladies title in 2000 Oct 9-11 2000 and she finished 5th in Canadian Nationals and earned herself a spot on the Canadian Jr. National Team. She chose to resign a few months later to continue to represent her native country of Turkey. She was assigned to compete in her first Jr. Grand Prix in Phoenix in 2001 which was cancelled because it was scheduled for the week following the tragic events of September 11th . Her second Jr. Grand prix was in Poland but she was again unable to compete because she broke her ankle while doing a triple flip on the very last practice before the competition. This ankle injury also kept her out of the qualifying rounds for the Salt Lake City Olympics. In the Past year she has made major leaps towards achieving her goals in this sport. She finished 13th in the European Championships, she carried her country’s flag at the Opening Ceremonies in the Olympic Games and made to the finals finishing 21st. She followed her great performances at the Olympics with 2 more clean programs and finished 18th at the World Championships in Calgary, Canada. It was an amazing experience for her to skate so well in front of an audience in Canada as she makes her home here.